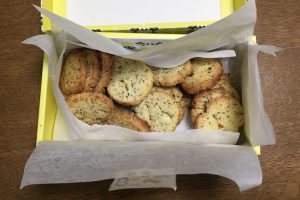 Hand made cookies arrived from my daughter, Neurologist, as a Vallentine’s Day present.
神経内科医をしている娘から、バレンタインの手作りクッキーが届いた。

The latter photo is the screw case she made for my birthday persent 21-years ago. It was made of a caramel case by herself and I could not dispose for 21-years.

I am proud of my daugher who has gone through many hardships into where she is.
I can say that she has gone ahead of me already.

When I tried something, I seldom saw it through to the end. I asked myself, “What would be the best way to change myself? What can I do to challenge myself?”
I chose judo for its intensity and its discipline, and joined the judo club with my best friend Kayo.
“Namiko joined the judo club!” “Unbelievable!” Everyone was surprised at my decision.

In my first year the judo club had seven members with Kayo and me being the only girls. I enjoyed judo until the third graders retired. With the third graders gone, other team members lost interest and their attendance was sporadic. Eventually they quit coming one by one. Kayo and I were the only ones who still went to practice.

The second year arrived and the judo club reached a wall. I anticipated new members but the school year didn’t bring a single one. Kayo and I found ourselves totally alone during practice. How were we going to improve?
Then something happened. Anri, one of my classmates, joined the club. Anri became very active at judo and provided a breath of fresh air.

The third school year began with a ray of hope: three freshmen members. They brought energy to our club, but at the same time, I was feeling responsibility as a captain.
In May, we had a grade promotion test. I had two matches. In one I had a draw and I lost the other by ippon. The judge later said to me, “You don’t have your judo yet!” I could do nothing but admit those words. It was clear that my judo was nothing but awful. I felt as if I were thrown to the starting point. What have I done these two years?

The last match is over, but in the end, I could not show any winning record. What a disappointment! I wanted to compete in more matches, and I wanted to win more. I thought, perhaps I made the wrong decision. I thought as if it had been wrong to choose the judo club. “What in the world have I done with judo? ”
When I was so depressed, Kayo said to me. “I also can’t say I don’t have any regret, but there is no use crying for the past.”
“That’s right.” There must be at least something I got from judo.
Suddenly, a flashback, the faces of my friends who have always been together at practice.
I once injured my back during practice just the day before the match. I was depressed because I couldn’t take part in the match and had to stay in bed. After the match, Kayo and Anri kindly visited me with a present and encouraged me by telling about the match. How happy I am with such nice friends!
Yes, it’s judo that brought us all together. My friends and experiences with judo will remain with me for the rest of my life.
In the end, did I change myself? I will know the answer at my next challenge in the future.